The proposals put forward are so far revolutionary by all means, overhauling currency, revamping organizations as we know them, ridding the world from intermediaries, and even changing the way we communicate with each other.

If we take one-step back, as impressive as these initiatives sound, they all seem too difficult to implement, in fact, they all want to replace the current order with something entirely new. While this will certainly be true in the end, the path may be somewhat more of an evolution than revolution in many cases.

An alternative view for the application of Blockchain technology is of a multi-step approach. First, the Blockchain acts as an enhancer to the current state of affairs, running in a hybrid model where the current way of doing things is significantly enhanced by the Blockchain.  Second, the world moves into full blockchain adoption. Last, Blockchains integrate and coordinate with each other. This journey needs to progress in incremental steps mainly because:

Within this current state of affairs, the case for leveraging the Blockchain for an in transition platform has many merits.  With this view, we will have time to bridge the gaps standing in the path of Blockchain mass adoption while retaining what works today.

We illustrate this idea by taking the proposals put forward to revolutionize the email system as an example.  Current initiatives propose replacing SMTP with a Blockchain based protocol, changing the way emails are stored into Blockchain based repositories.  All these activities require major changes in infrastructure across organizations, the introduction of new protocols, and even changing the addressing scheme we use.

What if we find an 80/20 approach to utilize the benefits of the Blockchain without overhauling the entire email world?  This was the question, which we set forward while exploring the idea. To start, we first looked at the main benefits of turning emails into Blockchains, which are as follows:

The above benefits largely will be responsible to significant reduction of Spam email and also Phishing attacks through email as traceability, authenticity and integrity will be built-in features of the platform.

We began to explore the possibility of achieving these goals without changing how emails work from the ground up.  By running a Blockchain in parallel to SMTP, we can achieve the first two goals and partially the third with minimal interference.  We call this approach Hybrid Blockchain Mode, the case for this approach is as follows:

We will detail here an approach to secure Emails using encryption while utilizing the Blockchain as a medium of key exchange and transaction ledger.  The transaction ledger provides overall accountability and traceability for email exchanges while the encryption is really just an easy add-on to the whole idea.  This system runs in parallel to SMTP, not as a replacement to it, providing users with the option of either running on pure SMTP or Blockchain enhanced mode (we call this mode the registered email mode in the example we provide)

We have to emphasize that we view this hybrid approach only a stepping stone towards end-to-end Blockchain based email infrastructure, however the benefits of having a non-disruptive integration with Blockchain at this point in time merits consideration, below is our view on how we foresee Email platforms evolve on the long run using this intermediary step.

Why is it needed

Email encryption alone is no longer enough, the ability to track email flow as transactions is becoming a necessity, especially in cases where business is conducted and real time validation of email flow is required.  Think billing, invoicing, and contract exchange.  We also need a stronger authentication mechanism for user identities. Securing email accounts as we do in cryptocurrency wallets for critical transactions is a necessity today.

In practice, email encryption today is implemented on the email provider level in most cases, GMAIL to YAHOO, etc.  This approach provides in transit security for emails only; it does not take into account many other exposure levels. Additionally, tracking and investigating email transactions is also a complex task today, often requiring access to many internal email platforms and reviewing large amounts of logs for traces of email exchange evidence.  Utilizing email as a tamper proof platform for legal exchange is held back by this limitation.

Our approach addresses these challenges of with a simple modification to how existing emails can work when we augment SMTP with BlockChain as an additional security layer. Expits Registered Email solution gives the extra option to the user to send an email through a secured or a regular channel on per email message basis.

A quick comparison between the three different states of email security will help illustrate the value of having a hybrid version of email systems that use the Blockchain for security applications.

The Outlook plugin is responsible for handling all activities taking place between the Blockchain and the email client including sending/receiving mechanisms. We chose outlook due to its popularity and ability to be enhanced via simple plug-ins.

We built the plugin using .NET (C#),  Ethereum supports this approach via Nethereum, a.NET integration library for Ethereum, this approach also allowed us to interact with Ethereum clients like geth, eth or parity using RPC.

While designing the plug-in we took into consideration not to alter any behavior Outlook users are used to while sending or receiving emails. So, the main entry points for our plugin are embedded within the new-email and read-email screens.

The plugin is designed to ensure the below features:

The contract is written in “Solidity” which is a contract-oriented, high-level language for implementing smart contracts. It was influenced by C++, Python and JavaScript and is designed to target the Ethereum Virtual Machine (EVM).

Our smart contract is designed to follow the sending and receiving steps. Each step is represented by a method responsible for either checking a value for verification or saving a value for later retrieval. The contract also includes some helper methods for validation. Below are our main smart contract methods:

Below is the main flow of both the Outlook plugin working along with the Ethereum smart contract. The process Is performed locally by both parties with most tasks flowing through the etherum contract except for the email transmission step which is carried out via SMTP

We designed the process not to interfere with how SMTP works. So, the first step is carried-out inside the new email window which all users are familiar with. Our plugin user will encrypt the email to be registered with a shared key. The encryption process includes generating an email Id to be used as an email reference and the email hash which acts as an invisible seal to the email.  The output of this step is an encrypted email as an attachment to the original email. The user then will place a transaction that includes the email Id along with the recipient Ethereum public address on Ethereum using our contract as the first entry point on the blockchain for that email. The user will then send the email normally using Outlook.

As you can see, we used the Ethereum Blockchain as our mean of transferring all necessary information needed to complete the email registering process benefiting from the main feature of the blockchain which is its immutable transactions ledger.

While this project is aimed towards validating the case for hybrid Blockchain applications, it is by no means ready for production or wide adoption use yet, the limitations we have identified so far are as follows:

Summary and the road ahead

The approach we introduced here is one for the in-transition case from a pre to post Blockchain world.  We argue that the hybrid implementation of Blockchains, in which existing systems run in parallel to the Blockchain, is in many cases the most realistic way forward.  The example we use to illustrate this concept is based on email security.  With simple modifications, an email system can benefit from many capabilities the Blockchain brings forward without changing any of the underlying email components.  Our aim from this effort is to highlight the benefits of running Blockchains in hybrid mode.  We are just at the beginning of the exploration task.  Use cases similar to this one will help bridge the transition gap to Blockchain based systems.

We see a future for this approach evolving in two fold, for email client developers and email providers, incorporating this approach into their mail clients is straightforward.  Providers can easily add these as options in their current clients while giving users the choice for which Blockchain/contract to join.

For Blockchain platform developers, adding specific features within their platforms to handle email may be a key differentiator around platform dominance as this technology evolves.  One candidate feature we are currently exploring is Ethereums precompiled zkSNARK contracts use to extend anonymity of mail traffic through Ethereum.

Our GitHub page includes source code for the above example and precompiled test client for Microsoft Outlook: https://github.com/expitlabs/blockchainsolutions

Denying the impact of Blockchain technology is a difficult case to sell these days. Almost every industry is beginning to comprehend Blockchain’s impact and understand how it will revolutionize the future.  After all the Blockchain bridges a very important gap, that of trust. The proposals put forward are so far revolutionary by all means, overhauling […]

Hello All, A while ago, I had couple of customers who had requested this task. At times the SCOM health service would get stuck or stop collecting performance for the servers. In this case, the monitoring or the NOC team would login to the servers and restart the health service. However, the problem was that […]

Hello Everyone, So I have been having a lot of customers requesting the option to have a task to send email for Service Request directly (and to send email to the Change Initiator for Change Request) like the ones we have for incident. There are a couple free ones out there that are available for […] 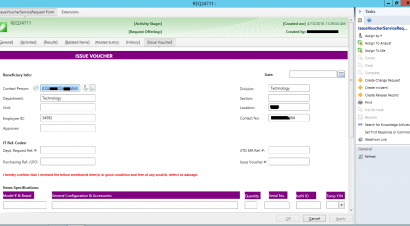 Hello Guys, So lately I have been a lot of work on Service Manager and I keep coming across interesting requirements. This topic in particular is not a difficult one, but as I did not see much information available on this on the internet, I thought it would be an interesting article to write about. […]

Want to get in touch?